All professionals at Stephen DeFusco, DMD maintain the highest levels of accreditation and pursue ongoing education to stay abreast of the latest trends in the medical field. Read on to learn more about our staff's experience and training.

Dr. Stephen DeFusco has enjoyed the practice of general dentistry now for over 30 years in the comfortable setting of his Bloomfield/Shadyside office. He received his undergraduate BS degree in Physical Therapy from Temple University in 1977 and went on to work for three years before returning to the University of Pittsburgh School of Dental Medicine where he earned his DMD degree in 1984. Key clinical areas of interest have been Endodontics,Oral Surgery and Dental Implant Placement. He is an active member of several dental organizations including the Pittsburgh Academy of General Dentistry .

Dr. DeFusco resides in Pittsburgh with his wife and is the father of four children, one stepdaughter and three grandchildren.

Interests outside the clinical area include boating, home remodeling, waterskiing and snow skiing along with gardening. Over the past few years his passion for dentistry has expanded to include mission work in Haiti along with his daughter who shares her nursing skills with a very needy people. 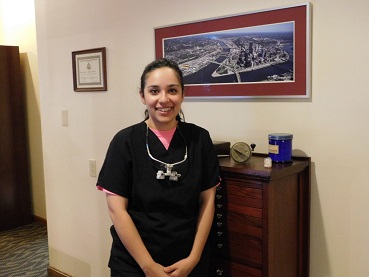 Dr. Heba Alani has been a general dentist in the Pittsburgh area since 2011. She received her BS in Microbiology and Immunology from McGill University , Canada in 2005. Following that she earned her DMD degree in 2009 from McGill University . In 2010 she completed a Pediatrics GPR from the University Of British Columbia in Vancouver, Canada and furthered her skills in general dentistry by completing an AEGD (advanced education in general dentistry) at the University of Pittsburgh. She currently resides with her husband and two daughters in Pittsburgh. In her free time she enjoys traveling, baking, spending time with family and friends and trying some of the new restaurants that Pittsburgh has to offer.